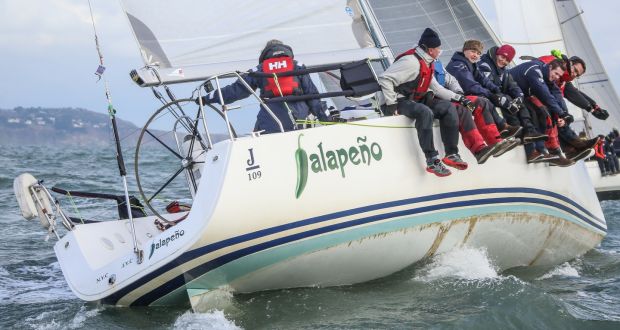 All the ingredients for a spicy winter series finale will be dished up on the capital’s water this Sunday in race seven of the Dublin Bay Sailing Club (DBSC) Turkey Shoot Series.

According to forecasts, it looks like the 2018 series will be the first complete series in many editions of the 16-year-old event when the record winter fleet sets sail from Dun Laoghaire Harbour. Six races have produced six different overall leaders so far.

But when the results came in after the penultimate race, it was the National YC J109 skippered by Paul Barrington that had turned up the heat on the leaderboard mix.

Now Jalapeno holds a five-point lead in the 77-boat fleet, causing DBSC organiser Fintan Cairns to declare “anything could happen”, which means it probably will in this one-course-fits-all event.

Originally based on the ethos of Howth Yacht Club’s Brass Monkey Series, the 2018 event at Dun Laoghaire features a great mix of keelboats from the 20-foot Flying Fifteen up to ocean-going 50-footers as well as some new designs to boot.

Two Jeanneau Sunfast 3600s are joined by an Italian-built Grand Soleil design, all new racing boats to the Bay.

Cairns adds character to the series with his can-do attitude, novelty prizegivings and raffles as well as an innovative handicapping system that continually draws plenty of debate among the 500 competing sailors. Literally, anyone has a chance of winning a race – or the series – and for some crews, the series now represents the only racing done all year.

While there is an unashamedly fun element to proceedings, (protests, for example, are frowned upon) the Turkey Shoot’s successful format could yet point the way to better turnouts for summer racing fleets too, especially in its short, sharp format that guarantees sailors are ashore by lunchtime.

Evidence of this is in the four separate weekly starts that include many of the waterfront 1720s.

Typically, these sportsboats are used for sailing tuition and thus the Turkey Shoot now doubles as a training ground for novices too. At a time when the national sailing conversation is focused on a dearth of available crew and how new blood can be recruited, DBSC appears to have found a winning formula.

On the south coast, the recent AGM of the South Coast Offshore Racing Association brought a breath of fresh air with the much-approved election of Johanna Murphy of Great Island Sailing Club as the first woman sailor to be Commodore.

She takes on the role with a clear vision of encouraging coastal races that may yet include a new fixture with Dunmore East in County Waterford as a start or finish port.